You are here: Home / Recipes / Dessert 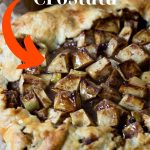 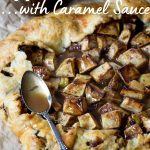 Apple Crostata is a rustic version of a apple pie or apple tart. Flaky pastry is filled with tart apples that are sweetened with brown sugar and cinnamon. Serve slices topped with a homemade caramel sauce and a scoop of ice cream! Or for another option top it with this Butter Rum Sauce and a little whipped cream.

If you have a lot of fresh apples, this Apple Spice Cake with Butter Rum Sauce or Instant Pot Applesauce recipe are amazing too. However if you are just looking to fill a craving for apples, you can check out these recipes too:

A crostata is defined as an open faced fruit tart. It is similar to a pie without a top crust. The bottom crust is instead folded over about an inch around the sides to hold in the filling.

This pie crust recipe really makes this crostata over the top! It is the flakiest and most tender crust I have found. Not to mention it is super easy to make.

However, if you need a short cut in the kitchen you can always purchase a refrigerated crust at the store!

This recipe calls for Granny Smith apples, which are crisp and super tart. That tartness balances the sweetness of the brown sugar and caramel sauce. However you can definitely still taste the tart puckery bite of the green apples.

If you want something sweeter you can choose one of these options, or a combo would be great too:

How to Make Apple Crostata

Start by making the pastry dough and wrap it in plastic wrap, pop it in the fridge while you make the apple filling.

At this point go ahead and preheat the oven to 350.

In a large bowl toss the apples with the lemon juice. Now mix them with the brown sugar, flour, and spices. Set aside.

Take the dough out of the fridge and roll it out to about a 12 inch circle on a lightly floured surface. This does NOT need to be a perfect circle, remember a crostata is “rustic”. Transfer the dough to a parchment lined baking sheet.

Pour the apple mixture into the center of the crust, leaving about an inch of crust around the edges. Fold the extra crust over the edges of the apple filling. Optional – you can brush the dough with an egg wash for a nice golden crust.

While the crostata is baking make the caramel filling, then pop it in the fridge.

Store leftover apple crostata in an airtight container. You can store it on the kitchen counter at room temp, like a pie, or you can store it in the fridge. It should last about 4-5 days.

Store any leftover caramel sauce in the fridge in an airtight container. It will last for 2 weeks in the fridge! 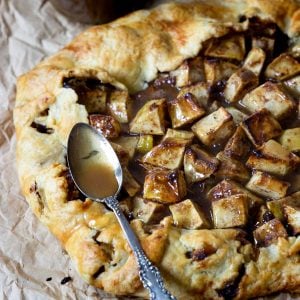 OTHER SAUCES: You can also try this Apple Crostata topped with Butter Rum Sauce and whipped cream. If you have a lot of desserts that would be good with the caramel sauce or you have a dessert buffet, like during the Holidays, you can follow this recipe for Brown Sugar Caramel Sauce to make a double batch.
Did you try this recipe? Connect with me & let me know how it turned out by commenting below!
Jump to Comments
Serving: 1serving | Calories: 372kcal | Carbohydrates: 66g | Protein: 2g | Fat: 12g | Saturated Fat: 6g | Cholesterol: 21mg | Sodium: 207mg | Potassium: 174mg | Fiber: 3g | Sugar: 50g | Vitamin A: 288IU | Vitamin C: 5mg | Calcium: 46mg | Iron: 1mg