You are here: Home / Recipes / Soup and Stew 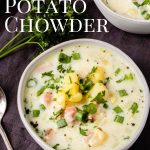 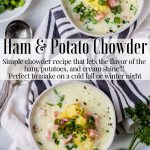 Ham and Potato Chowder is a delicious and comforting soup that is great for colder weather. There are not a lot of complicated flavors in this recipe, instead the ingredients are straightforward letting you really taste the potato, ham and cream. It is especially great to make when you have leftover ham.

Chowder is a soup or stew that has a milky or creamy base. It is also thickened with a roux or starch of some kind. In this ham chowder recipe we thicken with three ingredients:

This is not the time to snub your nose at Instant Potato Flakes! I know they have a bad reputation BUT they are perfect in this recipe. Promise!

Now, I would not use them for the potatoes on my Thanksgiving table, but they make the perfect thickener for potato soups. They add a great layer of potato flavor and they thicken the soup perfectly! I also use them in this Instant Pot Creamy Potato Soup recipe and this Cauliflower and Potato Chowder .

What Ham to use for Ham Chowder

If you have leftover spiral cut or bone in ham from the holidays or a celebration, lucky you!!! This is the perfect recipe to use up your leftover ham. (if you have a lot of ham check out this post on 20 ways to use up leftover ham).

If you do not have leftover ham, don’t despair there are great options in the grocery store! You can buy a ham steak and it will still give you amazing ham flavor in your soup. If you can find a bone in ham steak like the one pictured above, buy that one!

How To Make Ham and Potato Chowder

A note about SALT before you get started….You may be saying to yourself, “well she forgot the salt, I’ll just add a little”. STOP RIGHT THERE…there are a lot of salty ingredients in this recipe, so do not salt until you taste the finished product at the end, or you could ruin an entire pot of soup. That would be too sad. So pump the brakes and wait until the end.

Now on to the chowder recipe….

Start with a large pot on your stove top over medium, medium-low heat. Saute the onions in olive oil until they begin to turn translucent, about 5-8 minutes.

Add the water, chicken base, and potatoes and turn the heat to medium, medium-high. Cook with a light boil until the potatoes are fork tender, about 15 minutes.

Lower your heat to medium-low and add the ham, dried basil, and pepper. Cook for 5 minutes.

Now it’s time for the yummy creamy-ness. Slowly pour in 1 ½ cups of heavy whipping cream. Then stir in the potato flakes. Cook for another 5 minutes, allowing the cream and potato flakes to thicken the soup.

Now is the time to taste for additional salt.

Serve topped with green onions. Some other great toppings would be sour cream, bacon bits, cheese, tabasco…. Anything you like on top of a loaded baked potato! 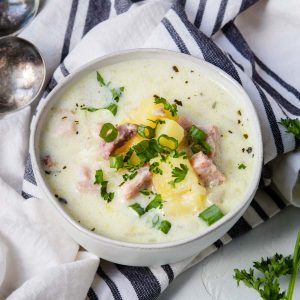 Do not salt until you taste the final soup! You may not need any salt.

To Make Ahead:
Prepare completely, cool, and store in the fridge for up to 2 days.
To serve slowly warm on the stove over medium low heat, stirring occasionally, making sure it does not come to a boil. You may need to add a little liquid (milk or chicken stock) as it will thicken in the fridge.
Did you try this recipe? Connect with me & let me know how it turned out by commenting below!
Jump to Comments