You are here: Home / Recipes / Breads and Baking 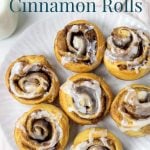 Crescent Cinnamon Rolls are delicious homemade pastries made easily by using store bought crescent dough. This is a great 5 ingredient cinnamon roll recipe (including the frosting)! It is especially wonderful when you don’t have the time or energy to make your own cinnamon roll dough.

I love that this recipe only calls for 5 ingredients, including the frosting! You probably already have most of them in your pantry and fridge:

Start by preheating your oven to 350 degrees. Grab a muffin tin and spray each cup with cooking spray or grease it with vegetable oil.

Open an 8 count tube of crescent dough. Try to pull the entire dough roll out without breaking it into triangles. You will use the dough as one sheet.

Pinch the perforated seams closed with your fingers.

In a small bowl mix together the brown sugar and cinnamon.

Sprinkle the cinnamon filling over the dough evenly. NOTE- you do not have to use all the filling.

Roll the dough up, over the filling, as tightly as you can.

Cut the roll in half. Cut the halves in half, you will now have 4 pieces. Cut each of the 4 piece in half, giving you a total of 8 cinnamon rolls.

Place the individual cinnamon rolls into the muffin tin, lightly pressing down on each one.

BAKING TIP: If you have empty cups in the muffin tin add a little water to those cups. This will help the cinnamon rolls bake evenly.

While they bake make the frosting. Simply whisk together the ½ cup powdered sugar and 1 tablespoon milk.

When they come out of the oven, drizzle with the frosting and serve!

If you know you are going to have a hectic morning, you can make these cinnamon rolls a day in advance. Roll the dough, place uncooked cinnamon rolls in the muffin tin and cover with plastic wrap. Place in the fridge for 1 day.

Remove and cook according to directions. You may need to add 1 minute to cook through.

If you are from the Midwest then you will probably know what I am talking about: Chili & Cinnamon Rolls! It is a funny combo but it is a delicious match of savory and sweet. If love cinnamon rolls and chili together, check out these two chili recipes: 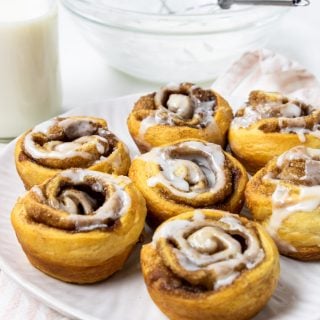 MAKE AHEAD These can be made ahead and cooked the next day. Simply cover the muffin tin of uncooked cinnamon rolls with plastic wrap and refrigerate overnight. Cook the next day according to directions. You may need to add 1 minute to cook through.
Did you try this recipe? Connect with me & let me know how it turned out by commenting below!
Jump to Comments
Serving: 2rolls

If you are planning a breakfast and need some other great breakfast recipes, here are a few to check out: