You are here: Home / Recipes / Drinks 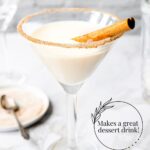 If you purchase RumChata also give this RumChata Espresso Martini a try!

RumChata is a creamy liqueur made of Caribbean rum that is flavored with cinnamon and vanilla. It is made to mirror the flavors of Horchata, a traditional Mexican, Central America and Spanish drink.

To make this Cinnamon Toast Crunch Drink, start by mixing the cinnamon and sugar on a flat plate. Then dip the rim of a stemmed glass in a little RumChata and then the cinnamon sugar.

Add a couple cubes of ice to a cocktail shaker, pour in the RumChata and Fireball. Shake. Then strain into the prepared glass.

Enjoy this as a happy hour or dessert drink! Optionally garnish with a sprinkle of cinnamon or a whole cinnamon stick.

Did you make this recipe?!

If you make this recipe I would love to hear your review. Pop down to the comment section and connect with me.

Then sign up for our Weekly Newsletter so you never miss a new recipe! 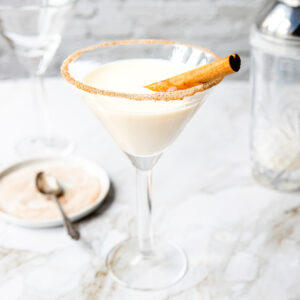 Did you try this recipe? Connect with me & let me know how it turned out by commenting below!
Jump to Comments